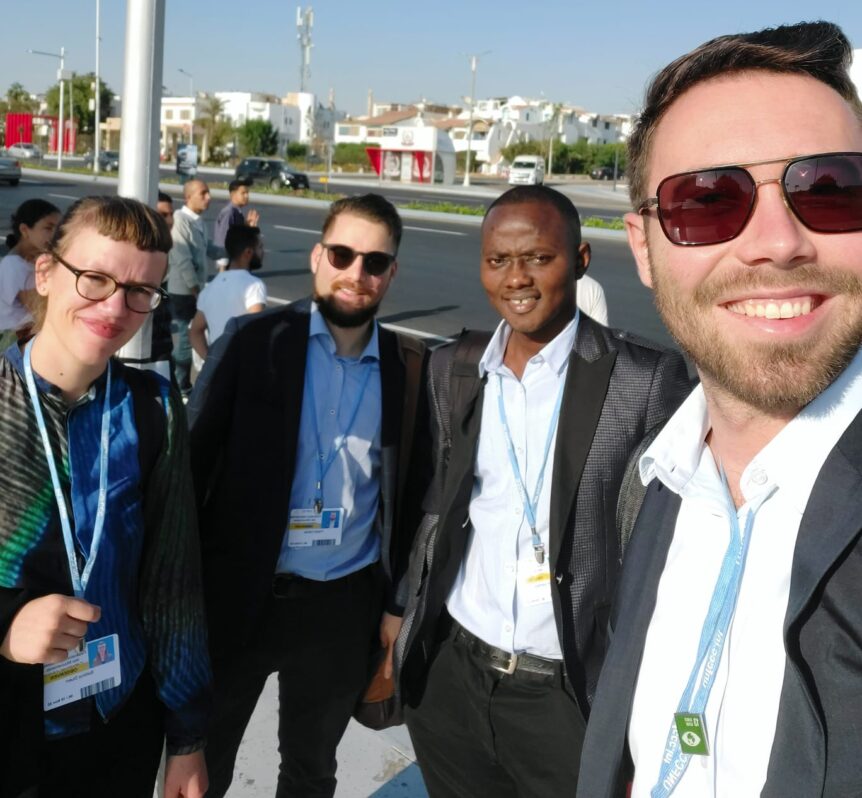 After months of digital preparation, several online seminars and a preparation seminar in Basel, Switzerland, the entire delegation was ready and full of anticipation for the meeting in Egypt. When the delegation arrived at the airport, they were warmly welcomed by Father Ermia, who also kindly hosted the FIMCAP delegation at the Our Lady of Peace Church for the duration of the conference.

However, there was not much time to arrive, because the COP27 started the next morning and the delegation was allowed to pick up their badges and explore the venue as well as the first ever Children and Youth Pavilion. Right at the beginning, Roman had the honour of representing YOUNGO (Official Youth Constituency of the United Nations Framework Convention on Climate Change) at the official opening plenary session. Bettina also participated in the YOUNGO Action for Climate Empowerment (ACE) working group and several preparatory meetings. Bilateral talks filled the first days.

Roman at the opening plenary: «Those few of us present here hope to share voices of those not present through the global youth statement. […] Now we urge more parties and other stakeholders to work with us in partnership, amplifying our voices in the negotiations»

The next days usually started with the YOUNGO morning spokes. In addition, FIMCAP delegates participated in European youth meetings and actively contributed to the ACE negotiations. There, FIMCAP advocated for a better involvement of young people in youth policies. Roman also participated in the negotiations on mitigation and Fidelis worked in the working group on adaptation. There were also group meetings to coordinate positions with other young people and prepare meetings with national delegations. Another highlight of the first week was Bettina’s intervention on behalf of YOUNGO in the ACE negotiations! 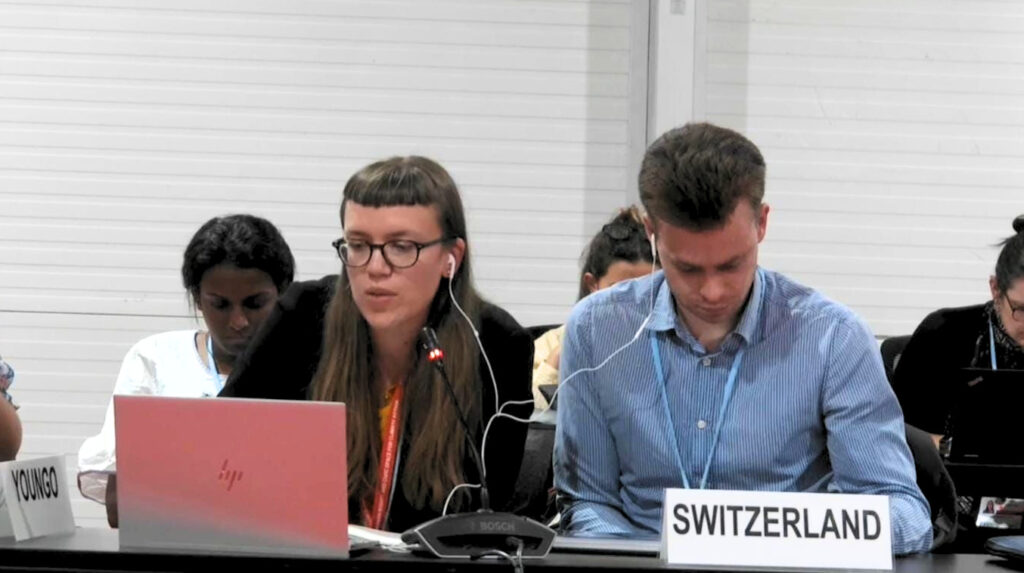 Bettina at the ACE negotiations: “YOUNGO feels strongly about pushing forward progress on an Action Plan; however, reiterates that this cannot be done in a way that leaves the most vulnerable behind and detracts from REAL commitments to action. […] We reiterate the significance and echo the cross-constituency comments shared about the importance of including human rights, access rights, gender, and intergenerational justice. Nothing About Us, Without Us.”

In parallel, there are always meetings with high-level politicians and delegates. McIvan took part in the meeting with the German Chancellor Olaf Scholz. A unique opportunity! Only 11 people had the chance to discuss current issues with the politician. Bettina attended a meeting with representatives from the Swiss Federal Administration to talk about sustainability in finance. Roman and Fidelis attended a meeting with Jennifer Morgan (head of the German delegation). In all these discussions, FIMCAP advocated for the concerns of children and youth, climate justice, human rights and loss and damage financing. 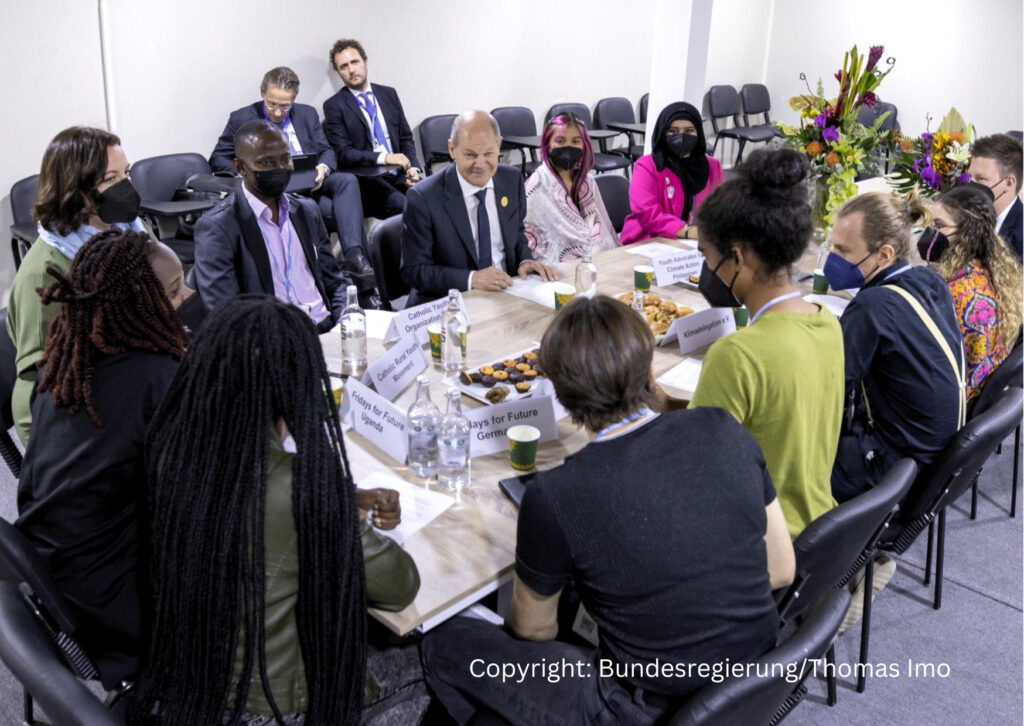 FIMCAP have also met and discussed with other faith-based organisations and catholic partners. The delegation was part of the “Interfaith Talanoa Dialogue COP27”.  FIMCAP was a part of several meetings with the  delegation of the Holy See, including the Nuncio. McIvan also had the opportunity to speak at a meeting with the Vatican and other Catholic stakeholders. 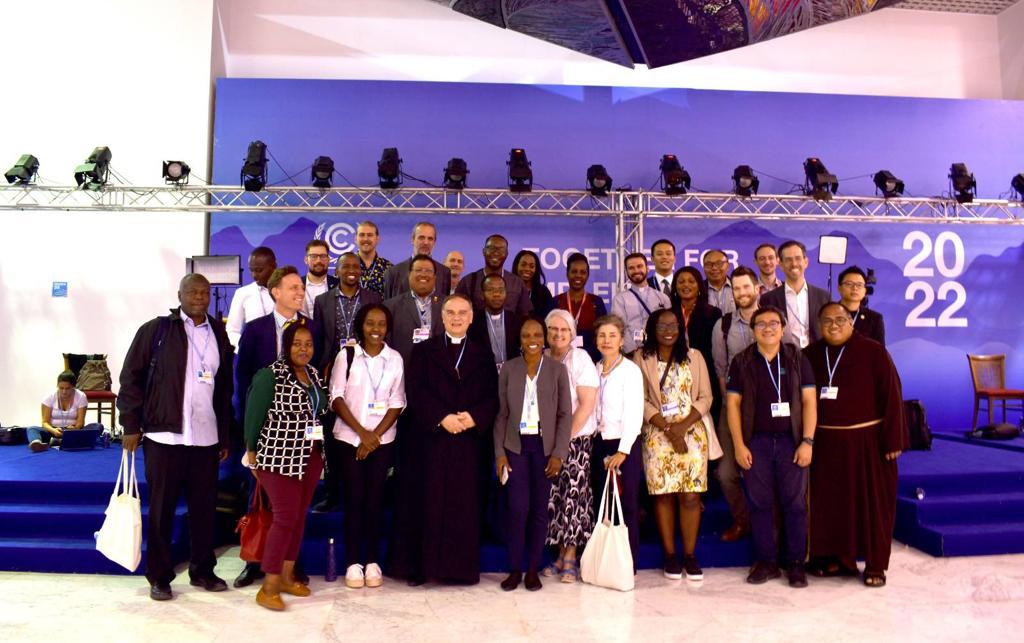 In addition to the negotiations, bilateral talks and discussions, FIMCAP was involved in several actions and large-scale protests for climate justice, human rights and loss and damage. Together with hundreds of people, the delegation participated in the climate march during the COP27 climate summit in Egypt. The organisers admit that the march took place inside the conference (in the Blue Zone – an area normally reserved for official events and not open to all activists) because the Egyptian authorities did not want to allow it on the street. 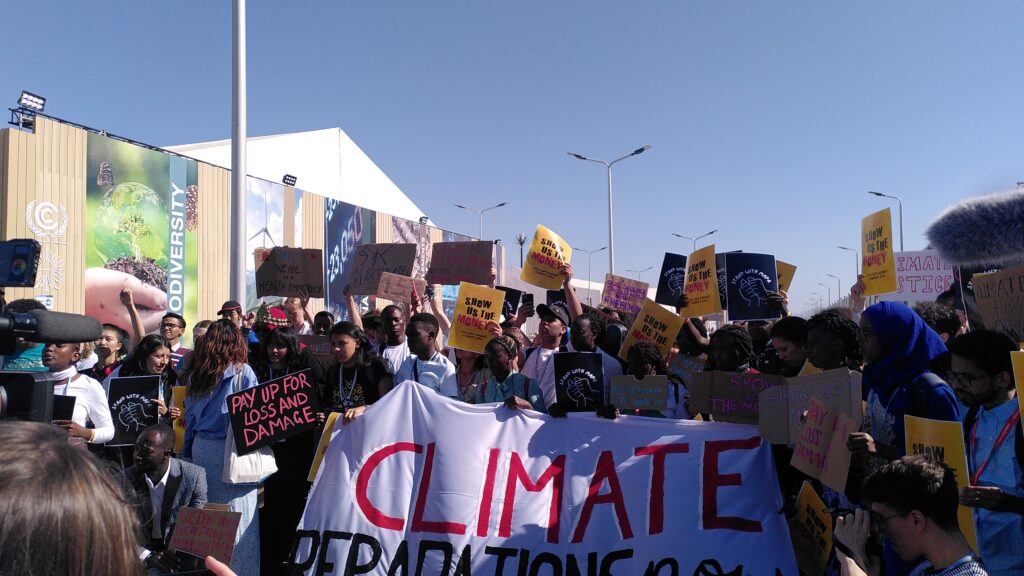 At the end of the day, the fossil of the day is always awarded. An award for the worst polluters. At the end of a long day, a funny event that is actually anything but funny. Because the fossils of the day are usually the countries that also complicate and delay the negotiations.

To conclude the first week, a civil society party organised by CAN (Climate Action Network) took place on Saturday evening. Sunday was a free day at the COP venue. In the morning, the delegation participated in Holy Mass with other catholic delegates at COP27. Then on Sunday, our delegates networked further and held a strategy session with KLJB in a relaxed atmosphere by the sea.

The second week started with a Gender Activism March in solidarity with women in the climate industry demanding more inclusion. There were also many networking meetings during the second week. 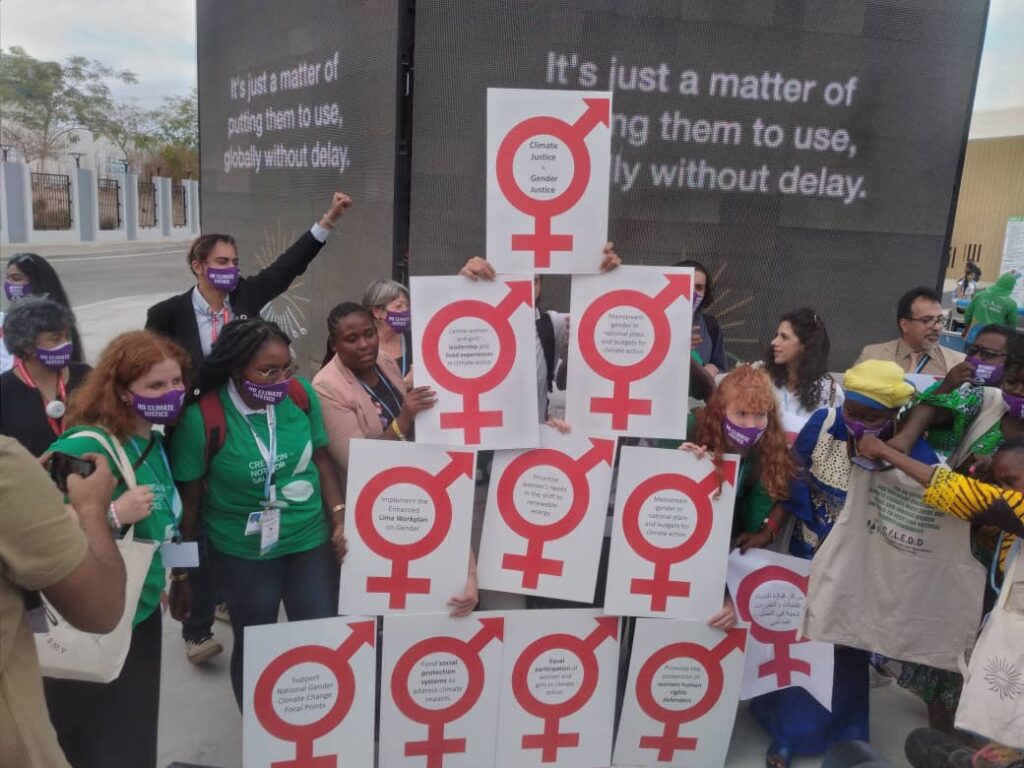 There were also a number of high-level meetings with politicians again.  Bettina and other young people from Switzerland met several times with negotiators from the Swiss delegation, which culminated in a meeting with the Swiss Federal Councillor Simonetta Sommaruga. McIvan worked with the African Youth4climate Masterclass to create synergies with African youth on climate. Paul and Roman attended a meeting with the German Minister of Environment. 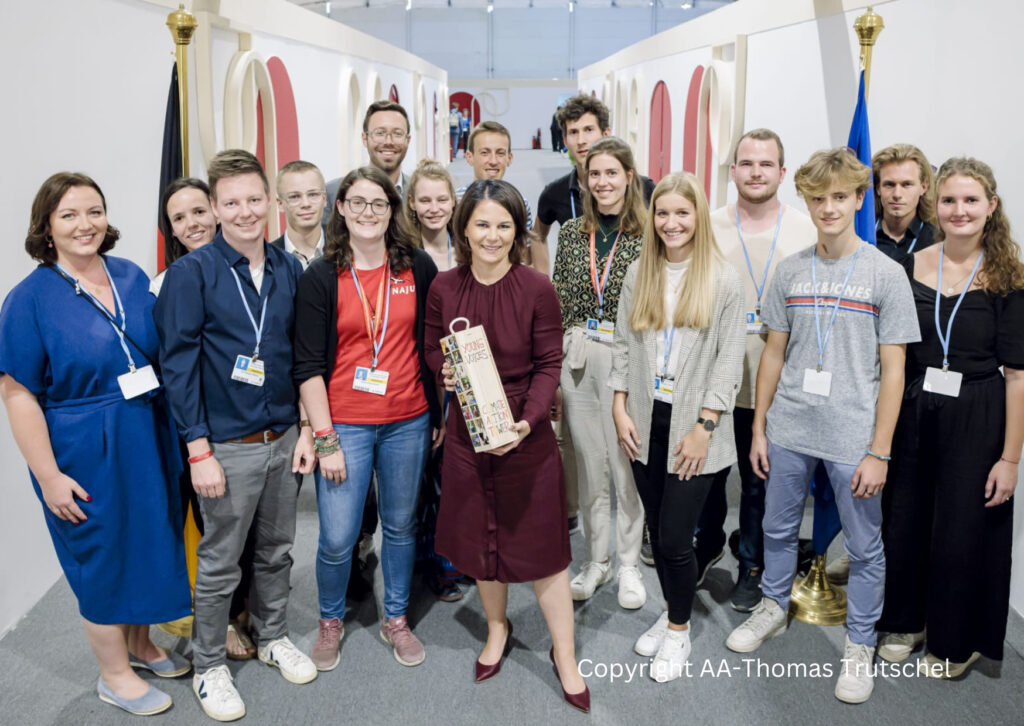 At the end of the second week and the entire conference, there was more intensive advocacy for the 1.5 degree target. On the last day, the team also participated in the meeting with German Foreign Minister Annalena Baerbock. And Roman actively participated in the press conference on the European demand paper. At the end of the last scheduled day, the closing party of the Children and Youth Pavilion took place.

But the conference went into overtime. However, for the most part without the participation of observer organisations. At the end, YOUNGO spoke up once again with a final statement.

“We are the present and the future, and we will hold you, our global leaders, to account on delivering the commitments of the Paris Agreement, even if so few of you remain in the room to hear our interventions. No climate justice without human rights. We are not yet defeated and we will never be defeated.” YOUNGO

In the end, the only thing left to do was to leave. The whole delegation had mixed feelings after two very intensive and exhausting weeks representing FIMCAP at COP27. 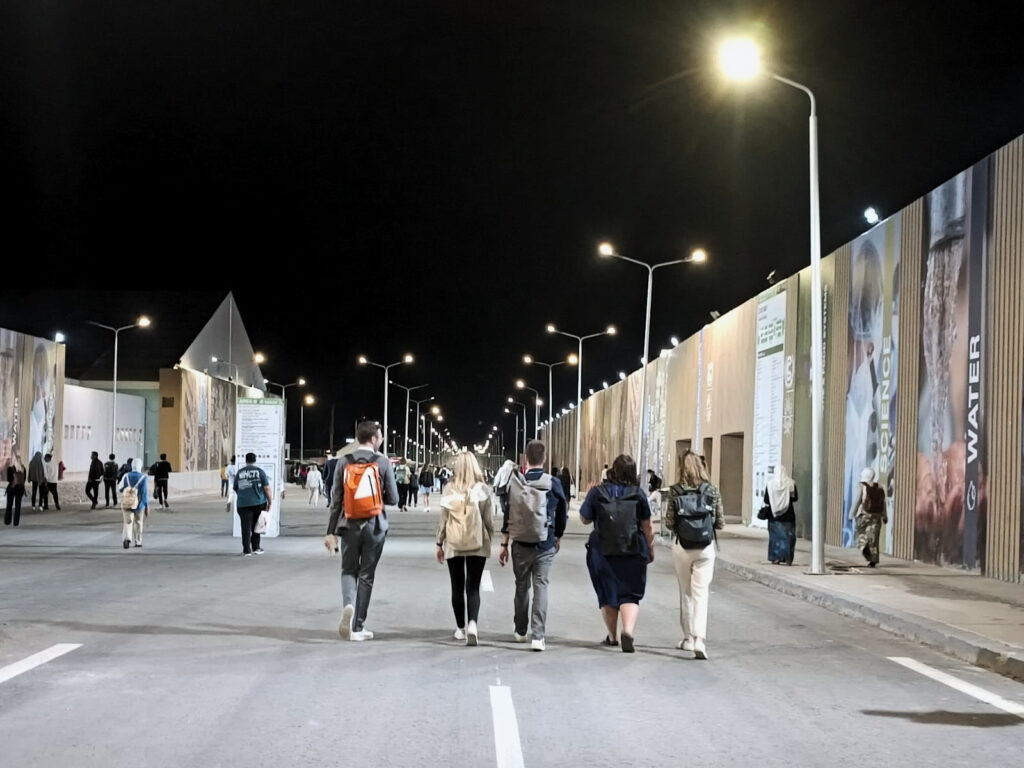 By the way, there will also be a COP28 in 2024. This will probably take place in Dubai and FIMCAP is planning to be there again with a new delegation to stand up for climate justice and the interests of Catholic children and young people. 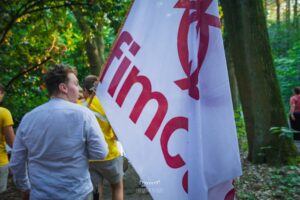